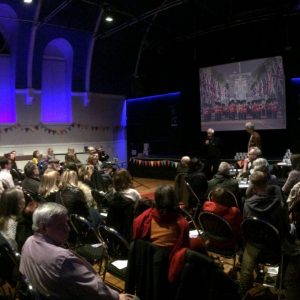 Many worshipping communities may want to come together and watch the funeral of Her Majesty The Queen, so the BBC is providing local communities a TV Licence dispensation.

The dispensation will allow any communal setting where TV is not usually watched, such as town halls, community centres and church buildings across the UK, to screen the live programmes without needing to purchase a licence.

In a message directly from TV Licensing of the BBC, Dan Cooper has told us, “We want to reach out to communities and those who are making arrangements to let them know that the dispensation is in place. By law, if live television or BBC iPlayer is viewed on any premises, those premises must be covered by a valid TV Licence. However, in exceptional circumstances, the BBC can grant a dispensation for the temporary viewing of television, so long as the viewing is for the sole purpose of screening an event which is judged by the BBC to be of national importance.

“As the BBC Board has said, Her Majesty Queen Elizabeth II was a unifying figure across generations, communities and borders, who represented the very best of our nation. We are grateful at the BBC to have witnessed, recorded and shared so many of the special moments in her long life and reign. She will always be remembered with the greatest affection and admiration.”