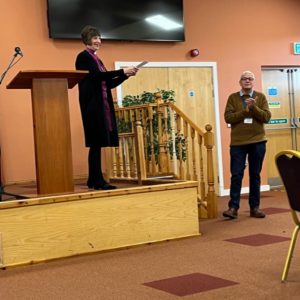 Every few years, clergy and lay leaders from our diocese go away for a conference, to learn, reflect, worship and reconnect.

During the conference, Bishop Rachel gave a sermon calling our leaders to be dwellers in God’s story, enabling others to do the same, and to be people who fire up hearts and minds to follow Jesus and share their own stories.

You can read Bishop Rachel’s full sermon below.

10 Then I heard a loud voice in heaven, proclaiming,

‘Now have come the salvation and the power
and the kingdom of our God
and the authority of his Messiah,[b]
for the accuser of our comrades[c] has been thrown down,
who accuses them day and night before our God.
11 But they have conquered him by the blood of the Lamb
and by the word of their testimony,
for they did not cling to life even in the face of death.
12 Rejoice then, you heavens
and those who dwell in them!
But woe to the earth and the sea,
for the devil has come down to you with great wrath,
because he knows that his time is short!’

In the beginning was the Word, and the Word was with God, and the Word was God. 2 He was in the beginning with God. 3 All things came into being through him, and without him not one thing came into being. What has come into being 4 in him was life,[a] and the life was the light of all people. 5 The light shines in the darkness, and the darkness did not overcome it. 6 There was a man sent from God, whose name was John. 7 He came as a witness to testify to the light, so that all might believe through him. 8 He himself was not the light, but he came to testify to the light. 9 The true light, which enlightens everyone, was coming into the world.[b]

10 He was in the world, and the world came into being through him; yet the world did not know him. 11 He came to what was his own,[c] and his own people did not accept him. 12 But to all who received him, who believed in his name, he gave power to become children of God, 13 who were born, not of blood or of the will of the flesh or of the will of man, but of God.

14 And the Word became flesh and lived among us, and we have seen his glory, the glory as of a father’s only son,[d] full of grace and truth.

I don’t know about you but when I was a child and being taught to write stories, I was taught that there needed to be a beginning, a middle and an end. They nearly all began with ‘Once upon a time’ and ended with ‘and they lived happily ever after’.

And then it was just a matter of the middle … and it needed imagination.

… And the story ends ‘happily ever after’ – no more tears, no more pain, no more dying. God is making all things new …

And then there’s the middle – and some key chapters of that have also been written: ‘The Word became flesh and lived among us.’ And in Colossians we are reminded that God is in the business of reconciling all things to Godself ‘… making peace through the blood of Christ’s cross’.

Christ has died, Christ is risen, Christ will come again.

Today, on St Michael and All Angels, let us note that angels in scripture do have a habit of saying ‘do not be afraid’. There is no need for us to minister from a place of anxious fear as if everything relies on us. This is God’s story and God’s actions in the past cannot be undone, and they have shaped a certain future as we continue to live in this middle part of the story and join in … and it needs imagination.

St Michael and All Angels is a very good day for that. The beautiful and mystical reading from the Book of Revelation sparks the imagination in painting that picture of the great battle in heaven where evil is overcome by good.

Everyone’s lives are shaped by the stories we hear. The different shades of political messaging, news headlines, social media or voices in the public square. It all shapes the narrative of how we understand our lives and the world around us. And there is a danger that the Church buys into the same narrative and looks through the same lens, simply adding some soothing balm. But that falls so short of living with hope-filled kingdom imagination.

Amid the narratives shaping people’s stories, there is a great desire for something ‘other’ – interestingly, angel tat is everywhere – and people’s imaginations are being fed by it. There is a longing for the mystical.

Our hope-filled kingdom of God imagination can meet that longing.

People often say that in life it’s hard to imagine what we don’t know, but as Christians we are not imagining in a vacuum. We have been baptised into the true mystical narrative of God’s kingdom. And in life’s delight and in its searing pain we are called to live our individual and collective story with imagination sparked and fuelled by the beginning and ending of the story authored by the God who is love. The God who has defeated evil. It’s good news for our villages, towns and cities.

Our prayer and worship should be firing the imagination of our minds and hearts. The Eucharist draws our story into God’s story week by week as we unite our voices with the angels and proclaim that heaven and earth are full of God’s glory. Each day we pray the Lord’s prayer for God’s kingdom to come on earth as in heaven. Are our imaginations being enlivened as we look for the signs of the kingdom and the sound of the angels, as we seek to join in through our lament and our rejoicing?

As ordained and lay leaders, it is so easy for our hearts and souls to become shrivelled and parched by the tasks and the narratives which weigh us down, distract our gaze and dull our imaginations – and we need to continually ask the Holy Spirit to kindle the flames of our imagination with the fire of God’s love.

And at this point let me say very quickly that living imaginatively is not to be heard as the antithesis to tradition. Too often people hear the word tradition as something staid, and imagination as being innovative.

I recently heard a great quote attributed to Gustav Mahler: ‘Tradition is not the worship of ashes, but the preservation of fire…’

Imagination needs to embrace that tradition which is alive and abundant – which has shaped our story in God’s story, and which kindles the present and points to the future as we proclaim the gospel afresh in each generation.

If tradition does not point us to the future, it is then cold ashes which belong in the past.

So, how are we, as leaders in the Church, renewing our hopeful imagination as we live between the beginning and the end?

It’s certainly not about wearing a ‘smile Jesus loves you’ badge and denying the pain and tears of daily life – the tragedy of abuse, addiction, the anxiety of fuel costs and the cost of living, destructive war and injustice, a ravaged earth, the pain of mental and physical health. But it IS about living it held in the narrative of assurance of the darkness never overcoming the light; and the eternal God, proclaimed by angels, who was in the beginning, and who has secured the end.

Which brings me to a final couple of minutes on the telling of the story.

As is stated in our vision of LIFE Together, I want to see us living ‘new and courageous ways of worshipping … which connect with more people’ … but not for the sake of it. Rather because I desire to see the impact on our world – the signs of God’s kingdom ever more visible, and people’s stories and our world’s narratives being transformed through the reconciling love of God.

That’s why I believe the Holy Spirit is shining a spotlight on those key priorities in our Life Together. It is not about fulfilling tasks and numbers and targets – it is about living and sharing Christ’s life in all its fullness, shaped by a vision which sparks us to live with hopeful imagination.

And all this requires us, as leaders, to foster communities of story-dwellers and story-tellers – the baptised people of God daily walking the talk in words, listening and deed.

During the Lambeth Conference, the Archbishop of York reminded us that evangelism contains the word ‘angel’ – messenger of God. Rather poignant for today. It is not about formulas and methods – it is about being story-tellers amid the stuff of daily life.

I know I bang on about ‘everyday faith’ and how the gathering of our worship should send us out, but it’s because I believe it is one of the biggest challenges facing our worshipping communities.

The National Church vision and strategy speaks of ‘missionary disciples’; our own diocesan vision speaks of ‘everyday disciples’ – but simply put, it is about how people of all ages and all stories, are encouraged and nurtured to dwell in God’s story every day of the week, living and sharing that story within their daily story. It’s a big cultural shift we haven’t shifted, and I believe that much of our understanding of our ministry needs to be reframed so that we place a greater emphasis on being nurturers of people dwelling in God’s story, and sharing that story.

Many chaplains, lay leaders and self-supporting clergy have much to teach us.

In the appointment process for parish priests, most profiles are excellent at stating a desire for a priest who can engage with the service pattern, even with schools and church community activity, but very rarely is there anything around seeking a priest who will be an imaginative enabler of all ages to be story-dwellers and story-tellers in daily life. As the opening words of the ordination service say: ‘In baptism the whole Church is summoned to witness to God’s love and to work for the coming of God’s kingdom.’ Very rarely do people state a desire for priests who will enable and nurture that.

So, in this final conference Eucharist, may we each be warmed again by the fire of God’s love so that we are awakened once more to the angels and the vision of God’s story, so that the story of our ministry in our different contexts and experiences is lived with hopeful imagination. And as we are fed by Christ in bread and wine, may we go from here to nurture communities of Godly storytellers who discover yet more of dwelling in the middle of God’s story with hopeful imagination.