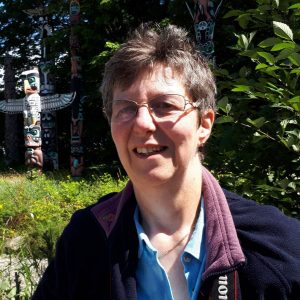 A childhood spent in the densely populated city of Portsmouth led Chris to a lifelong love of the great outdoors and a sense of responsibility for caring for the planet.

Chris said, “When I was a child, we lived in quite a built-up area. We had a small garden and an allotment, as my parents were keen gardeners, but I had little chance to play in the countryside. The coast was nearby, but not considered a safe play area, due to the mudflats. Most schools had only tarmac playgrounds, and few city churches had churchyards. My parents were keen on walking, so we would often jump on a bus or a train, and head out to the Hampshire countryside.”

As a teenager, Chris had the opportunity to join a Scout Group, and get out into wilder countryside. “I have been volunteering with the Scouts since I was 18. Scouting is what got me out to moors and mountains, learning bushcraft skills, and appreciating nature. It gave me a passion for the countryside, and I wanted to leave the places we visited better than we’d found them.”

Some years later, Chris’ Scouting role is to promote international links and global awareness to Scouts across Gloucestershire. The knowledge she has gained about the impact climate change and biodiversity loss is having on Scouts across the world made her keen to do more.

She said, “Scouting signed up to the UN Sustainable Development Goals and you can see the impact that our actions in this country make on people around the world. It is also humbling to see how much people in less developed countries are already doing”

She asked her PCC whether they wanted to do something on the environment and became the Eco Church representative for St Paul’s Shurdington. She has now taken on a deanery role too, being available to advise and help anyone who has questions about getting started on an eco-journey with their worshipping community.

“As a church, St Paul’s was quietly doing more than we had anticipated towards gaining eco church status. Our worship and teaching included regular celebrations of God’s creation, we never mowed until the spring flowers had died down and we were encouraging lift sharing.

“If you’re considering signing up for Eco Church in An Hour, you might want to use your first hour to register for Eco Church, to set up some bird or hedgehog boxes, or to consider how responsibly you’re consuming. Once you’ve done a few eco projects like this and perhaps audited a few areas and got some goals in place, it’s about making it part of your everyday life.

“The hour turns into multiple minutes spread throughout the week – thinking about what you buy – do I need this? Is it recycled, reused, is it worth it? Treating every resource as though it will run out one day, and not wasting anything. It’s all about being consistent.”

If you are in the Severn Vale area and would like some help or advice, you can contact Chris on /">

The Revd Joe Knight, newly appointed Priest-in-Charge at Twigworth, Down Hatherley, Norton, The Leigh, Evington, Sandhurst and Staverton with Boddington, is also very active on environmental issues and is available to help.