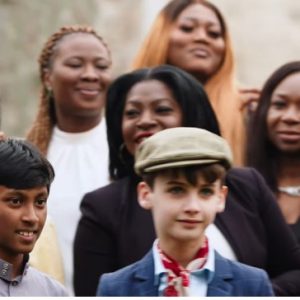 ‘Rise up and serve, thanking God for Her Majesty…’

That’s the message from the Commonwealth Choir in a new anthem commissioned by HOPE Together for the Queen’s Platinum Jubilee.

With singers and musicians from as far afield as Australia and Canada, India and England, the Commonwealth Choir’s performance of ‘Rise Up & Serve’ is being premiered at Spring Harvest, the inter-church conference taking place at Skegness and Minehead in the weeks before and after Easter.

The anthem has been written by songwriters Graham Kendrick, Mal Pope and the contemporary worship band Rend Collective for choirs everywhere to sing at Platinum Jubilee events and street parties this summer.

British Gospel singer Muyiwa Olarewaju OBE adds his own words of tribute to the Queen in Hausa, Swahili, Igbo and Yoruba, with the Aldgate School Children’s Choir led by Pat Bilborough adding an intergenerational sound.

Listen to the anthem then download the words and music from www.theplatinumjubilee.com/sing.

The Platinum Jubilee website also includes ideas for 70 Acts of Service to honour the Queen for her faith and service over seven decades and a new gift book Our Faithful Queen, which includes rarely-seen prayers the Queen prayed as she prepared for the Coronation.

How are you celebrating the Jubilee? Send your events to for our roundup.

One thought on “Jubilee anthem: Rise Up and Serve”