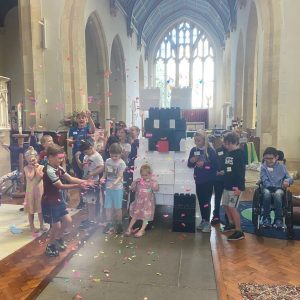 The Church of St Peter and St Paul, in Northleach, marked the first anniversary of LEGO® CHURCH by taking on a new Guinness World Record.

The Revd Dr (Mother) Alycia Timmis says, “We started holding a monthly LEGO® CHURCH service in July 2021 and it’s been wonderful to see it grow over the year. The first anniversary was a very special day for us, so we wanted to do something memorable to mark the occasion. As well as sharing a delicious birthday cake together, we decided to attempt a new Guinness World Record to construct the world’s largest plastic brick Cotswold sheep.

With the aim of ‘building faith – one brick at a time’, LEGO® CHURCH is an activity-based, family church service, where time is set aside for children to respond creatively using Lego® – with Café Church for accompanying adults.

“The sheep theme was an obvious one for us as the church was historically built by wool merchants in the area, and as sheep are the most-frequently named animal in the Bible, we thought a sheep was the perfect choice to make out of bricks.”

To construct this special sheep, a large number of big bricks were needed.

“We were blessed by being awarded a grant from the Diocese Mission and Ministry Fund and also a grant from the Lottery Community Fund which helped us purchase the bricks. I came across EverBrick, an international company that makes bespoke bricks and designs, and their UK branch happened to be in Tewkesbury. Alex Ayres, of Portable Plastics Company, had not had a request for a brick sheep before, but went away and put together a fantastic step-by-step construction guide and provided the 202 bricks needed to create the sheep.”

Alycia goes on to say how the build was a real team effort by the children and young people: “On the day, the children, aged from 2 to 12, split into two teams. Supported by our youth group leaders, they took it in turns to complete a step from the instruction book each. In our LEGO® CHURCH services, normally the children work independently in response to the message of the morning, but for this celebration all the children worked together and were part of this special event.”

The sheep took around 30 minutes to build and was six foot tall in the end.

Alycia says, “We’ve sent a video and details of the build to Guinness World Records for their assessment and as there is currently no record for a plastic brick sheep, we hope to be approved as the largest in the world, so watch this space.”

Alycia explains how, for some people, going to LEGO® CHURCH has really impacted their faith journeys.

“As a concept, LEGO® CHURCH has had quite an extraordinary impact on our worshipping community. We certainly don’t see it as a gimmick or a way of preparing children for ‘real church’ – we see LEGO® CHURCH as real church. As a mum to an eight-year-old son, I appreciate that using Lego is a great way for them to express and engage with scripture and God creatively. We simply offer this as a fresh expression of church and step back and let God do the rest.

“From LEGO® CHURCH alone, we’ve had four children come forward for baptism and confirmation, and at least three of our regular families are having their babies baptised. The first LEGO® CHURCH baptism takes place in October. A particularly exciting story is that the mum of one of the children who wants to be baptised has also now asked if she too can be baptised.

“Using Lego® to explore faith has been a wonderful way to engage young people, children and families, as anyone, at any age, can get something out of it.”

LEGO® CHURCH takes place on the first Sunday of the month at 10am at the Church of St Peter and St Paul, Northleach. Have you used Lego® in groups or services in your worshipping community? We’d love to hear your stories.