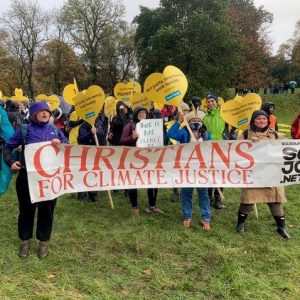 COP27, taking place over 6-18 November 2022, is an annual conference which brings together world leaders to accelerate action to reach the goals set out by the Paris Agreement and the UN Framework Convention on Climate Change. The Revd Dr Daniel Button, Director of Gateway Theology School in Gloucester, shares his thoughts on the lack of media coverage ahead of this year’s conference and how, as Christians, we can use our individual and collective voice to challenge climate injustice.

If COP27 rings a bell but doesn’t quite register, you’re not alone. Last year, one could hardly escape the tremendous build-up to COP26 in Glasgow, while this year there’s been nary a peep in the media. (As a reminder, COP stands for ‘Conference of Parties to the UN Framework on Climate Change’ – and this is the 27th conference.) So, why such lack of attention now?

Last year’s media frenzy was partly due to being hosted on UK home soil, and COP26 was the centrepiece of world news. This year, COP27 takes place in Sharm el-Sheikh (Egypt); crowds, public involvement and mass protests will be held to a minimum. A key component will be the rather dull and ever-delayed issue of climate justice – while world news focusses on the war in Ukraine, the death of the Her Late Majesty Queen Elizabeth II, fuel shortages, the cost of living increase, mass flooding in Pakistan, and hurricane season wreaking havoc. Climate justice and mitigation will generate barely a flicker in the public eye. Ironically, all of these existential threats (apart from the Queen) are directly related to climate change – yet the issue of climate change has dropped right back into obscurity. We’re so focussed on our dinner burning that we’ve forgotten the house is on fire.

‘Disaster response’ is human nature. It’s immediate, necessary, feels good and serving those in need is part of our Christian duty – so much easier than studying the root causes and working out tedious measures of prevention and mitigation. The current array of famine, floods, war, hurricanes, fuel shortages, refugees …  all demand action. So, we pump billions into the war in Ukraine, spend billions cleaning up disaster zones, billions on famine relief …  and what happens? The problems aren’t solved. They only get worse. And the money pledged for climate change mitigation? Delayed, avoided, non-priority. Kathryn Hayhoe calls climate change a ‘threat multiplier’. We’ve always had storms, but climate change multiplies their frequency, intensity and catastrophic effects – same with drought, famine, floods, heatwaves … so the cycle worsens, we keep addressing the symptoms, while the root cause (largely of our own making) continues unabated.

Is there any good news? Yes.

The hard, tedious work has all been done. The COP conferences have compiled decades of in-depth scientific analysis, brought governments and world leaders to global policy agreement, achieved consensus on the causes, urgency and outcomes of climate change – and proposed achievable solutions. One key solution is the recognition that the countries that have benefitted most from industrialisation need to shoulder the greater burden of covering the costs of fossil fuel transition and climate catastrophes. The poorest nations most adversely affected by climate change are the least complicit in causing the problem and need help. Wealthy nations have pledged over 100 billion dollars toward this end. This is climate justice. Yet it’s becoming known as ‘climate INjustice’ because this solution is never implemented but continuously kicked down the road. Giving money is contentious when we have our own problems right here on home soil. And don’t forget the war.

Even as Christians, justice is not a convenient option. Yet we’re all complicit in the problem, and we must all be agents of change – even sacrificial change – because we already know it’s the right thing to do. It requires both urgency and agency. Human agency must come from all three sectors – government, corporations and individuals. None of these can be successful without all working together. It’s too easy to say, ‘they’re not doing it, neither will I’. The Church is the largest social institution on earth and it has a voice. It also has three billion individuals. It also has a leader who demonstrated the meaning of prioritising the poor and sacrificing for the sake of others. And then he said, ‘Come, follow me’. 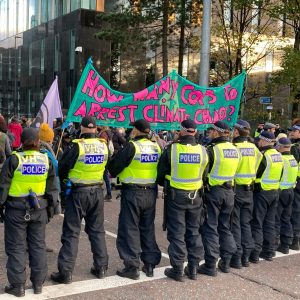 On 5 November, churches across the country are being asked to ‘Ring out for Climate!’ – find out more here.

Read Daniel’s reflections from COP26 here: “Protecting our planet is much bigger than individual salvation”