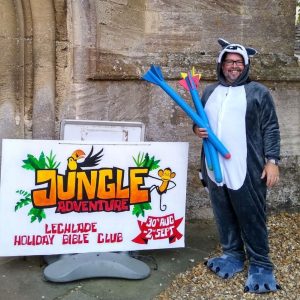 The jungle arrived at St Lawrence Church, Lechlade, which marked the end of the school summer holidays with an animal-inspired holiday club.

Being the first time in two years that they were able to run the club, it proved to be the biggest ever. For one week, a team of leaders and volunteers entertained, taught from the Bible and cared for no less than 77 children from the local community.

The Revd Andrew Cinnamond says, “We had an online booking form this year which made it easy for families to apply for places; however, we were so inundated with bookings we had to stop at 77 children – a wonderful problem to have.

“There was a real sense of people being keen to connect and take part in activities after the difficult time we’ve all had. Some of the younger children had had little interaction with others their own age due to the pandemic and had missed out on activities like this, so it was lovely to see so much enthusiasm and enjoyment.”

With close links to the local Church of England school and regular community programmes such as ‘Open the Book’ and their ‘Explorers’ after-school club, St Lawrence’s was able to reach many families in the local area.

“Around 30 children attend our weekly after-school club, and many of these also booked onto the Holiday Club. This year, we really wanted it to be more than a one-off event and build upon the things we already have going on, and to tie in with all that we do as church and how we live out our faith as a church family.”

The Holiday Club wasn’t just for the children.

Andrew says, “We needed an army of volunteers to run the club, and Gareth Griffith, our curate, was a great help, but as well as being a great training experience in parish ministry, we also wanted to ensure everyone involved was able to develop their own spiritual lives and journeys. So, we had a team of painters who met several times to prepare the decorations for the church building. We had caterers providing snacks and food, and others involved in preparing the craft activities, and setting up the church each day. There was a real sense of unity throughout the planning and running of the club. It was particularly special that many of our teenage volunteers were past Holiday Club members themselves, and had loved it so much they were keen to come back and help.”

Holding the club in the church building was a significant factor for Andrew and the team: “We had the option to use the local hall, but we intentionally based the club at church because we wanted to break down the barriers of being in a church building. Many of the families who attended the club don’t often come inside the church, so we wanted to show how it is an open and welcoming space for everyone. We had permission to remove the pews for a month and hire individual chairs and that made a great difference.”

On social media, one mum wrote: ‘So lucky and thankful to be part of your community. Thank you so much to everyone involved. The effort and energy that has gone into organising such a fantastic event has not gone unnoticed. My boys absolutely loved it.’

Andrew adds, “The Holiday Club takes around six months to plan and prepare for. There’s a lot of work involved by many people to bring it all together, and the week itself is full on, but it is such great fun and wonderful to see so many children enjoying themselves. On the last day, we held a lunchtime BBQ where parents and families could come along and eat with us and their children. This was a great way to get to know them a little better, and them us. We rounded off the week with a Holiday Club Sunday service which some of the families came to and shared the stories and crafts that the children made.”

Take a look at the St Lawrence’s Facebook page for some fantastic pictures of the week.