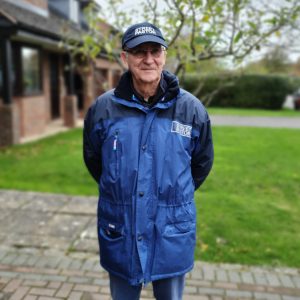 Six new volunteers have been commissioned to join the Cheltenham Street Pastors Team at Cheltenham Minster and the group is keen to find more new recruits. Street Pastors are trained volunteers from local churches who patrol the streets between 10pm and 4am, caring for the people they meet there.

We catch up with Michael Jenkins, 81, a retired Lieutenant Colonel in the Royal Marines, who joined the team earlier this year.

“On my first night, I realised how much Cheltenham Street Pastors were needed,” says Michael, who trained in January 2022 and has been volunteering since March. “Within minutes of leaving base, we met a young teenage girl passed out, lying on the pavement. Her friend was also the worse for wear and standing near her, but simply unable to know what to do.

“We stopped and talked with them, staying with them and waiting for the young girl to come round. After a while, we were able to help her friend call her parents, who came along and collected both girls and took them home.

“It was an eye-opening experience,” says Michael.

Some nights are busier than others, usually depending on the weather, but for the volunteers, there is always some kind of encounter. This includes helping young people who are feeling unwell, are stranded or separated from their friends, talking with pub and club doormen and staff, or the police.

A team goes out and about on Friday and Saturday nights, covering the streets, parks and nightclub hotspots in the town. The teams keep connected throughout the night and each group has access to the police through radio controls.

“It’s very rare there isn’t someone or some incident that we need to help with. We don’t get involved in brawls or fighting, and thankfully I’ve not experienced too many of those kinds of incidents. But if we do need any assistance, we radio through to the police, and they arrive and deal with the situation.”

The approach of the Cheltenham Street Pastors is an intentionally slow and gentle one, like a friendly relative coming along to clear up after the party and help keep people safe.

“Our job is simply to ensure everyone is safe when they are out enjoying themselves. We take rucksacks filled with useful items: lollipops – which are a great ice breaker, space blankets, flip-flops, water and in colder weather, hats and handwarmers. We also carry a dustpan and brush with us to clear up any broken glass we see – this is probably our most-used piece of equipment.”

There is a guided process to becoming a street pastor and full training is given.

Sarah Chad, Cheltenham Street Pastors Administrator, says, “We encourage people who are interested in volunteering to come out on a trial night, to observe the team at work and get a better idea of what’s involved. Then, if they are interested, they can apply using the application form on the Street Pastors website or by emailing Sarah. The application must be endorsed by their church. We also run a DBS check on all volunteers.”

Following the application and DBS check, an interview is arranged with two Cheltenham Street Pastors Management Team members, which is an opportunity to find out more about the role and the commitment.

The Cheltenham Street Pastors hold regular training sessions for new recruits. These cover subjects like preparing for the streets, safeguarding, drugs and alcohol awareness, listening skills and first aid, as well as a few hours with the police learning more about what to expect and how to work with them to get support.

Michael says, “The training is very thorough, and it is useful to feel as prepared as possible before going out. We operate in teams of four to six, so we have enough people with different skills to support one another and the public.”

Prayer is a key aspect of how Cheltenham Street Pastors operates. Each team has a small group of Prayer Pastors, who pray for the team at the start of the night shift, and meet during the month and at other times to pray. Many of the Prayer Pastors are ex-Street Pastors themselves.

“The majority of Cheltenham Street Pastors is made up of people from Christian churches of all denominations in the area. We are seen as a non-threatening, friendly face, which is really valued by the people out and about. Every time we go out, we are thanked by people, simply for being there.

“While we are all Christians, we’re not overtly evangelical. Sometimes people ask us to pray for them, but mostly we are simply there to listen and support, showing some compassion to those who are vulnerable, upset or lost.”

A converted horsebox, called The Stable, offers a safe space for people to go if they are cold, alone and in need of someone to talk to, or simply to wait while their lift arrives. To dispatch the horsebox needs six people on a team, so new volunteers are always welcome to join the team.

Sarah says, “We would love to hear from anyone who might be interested in becoming a Street or Prayer Pastor. It really is very rewarding and requires just one patrol per month, from 10pm to 4am. It’s easy to fit around other commitments. It’s a great way also to meet other Christians and make new friends.”

With a new training course coming up in the new year, if being a Street Pastor or a Prayer Pastor interests you and you’d like to find out more, contact

To find out more about Cheltenham Street Pastors, visit: https://streetpastors.org/locations/cheltenham/