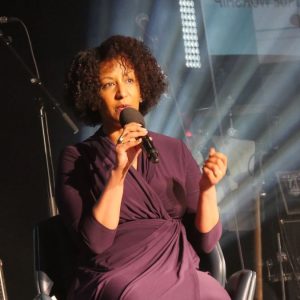 Eritrean Gospel singer and prisoner of faith Helen Berhane will be coming to Holy Trinity Church in Stroud on 2 July to share her music and her testimony.

Helen was arrested in Eritrea in 2004, shortly after she released an album of Christian music, after refusing to sign a document pledging to end all participation in Evangelical activities, which included her music. She had no possibility of contact with her family and was denied legal representation or medical care.

She was released in 2006 after an appeal from Amnesty International and wrote a book about her experiences, called Song of the Nightingale.

The audience is invited to ‘pay what you can’ to Christian Solidarity Worldwide, to support their work with anyone facing injustice because of their religion or belief.

Stroud is celebrating the music of those who are in exile in its Stroud Sacred Music Festival which starts on 9 July. The Festival is partnering with Stroud Together with Refugees. Almost all the performers in the evening concert are in exile from their country, including musicians from Syria, Ukraine, Sudan, Israel, Europe and Zimbabwe. The musicians are from a variety of different faiths, including Christian, Muslim and Jewish artists.

Find out more about the Festival and get tickets here —>

Get a flavour of what the festival is all about, with this video from 2018 interviewing Festival Co-founder and Pioneer Minister Simon Howell.