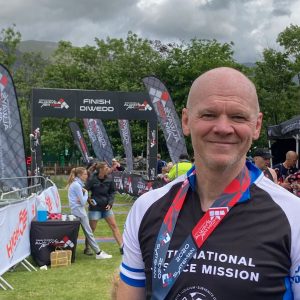 Appearing in his various sports kits on Facebook video posts in the lead-up to the event, he’s been sharing his top tips on how to slip into the grapevine and the moonwalk as you transition from your bike to a run, how to cross the finish line in style and what the ‘perfect’ form of race hydration might be.

Comedy aside, the Slateman Triathlon is a challenging, but beautiful course which runs through the stunning scenery of Snowdonia.

Roger said, “I originally signed up for the Slateman for my 50th year in 2020, just so I could say I’d done a full triathlon.”

While he declines to share his finishing time, he is happy to share more about the fantastic cause that he’s raising money for – International Justice Mission UK.

The charity partners with local authorities in 114 countries to combat slavery, violence against women and children, and police abuse of power against people who are poor.

He said, “One of the horrific by-products of the war in Ukraine is the human trafficking of refugees. IJM have an incredible track record in prevention of and freedom from slavery.”

He has so far raised £2,370, but you could help him raise even more by donating at www.justgiving.com/fundraising/roger-widdecombe3