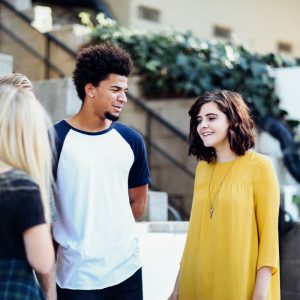 Barrie Voyce, Senior Youth Connector at the Diocese of Gloucester, comments on findings from a new research report confirming that – regarding faith – young people are most influenced by their peers, and how this creates an important role for adults in worshipping communities to influence the influencers.

“When I was 12, there was a boy called Paul in the 5th year at school who had the most amazing haircut. Shaved short from the neck upwards but quite long on top, with the sharpest line between the two. This style came to be known as a ‘step-cut’, but at that point no-one had seen anything like it. I asked my barber to cut my hair the same way, but he looked at me like I was a fool, and I’m sure my dad just told him to give me the ‘usual’.

“Within a few months, the step-cut became very popular and the barber was knocking them out over and over again. I never did get one. Why? Because I wanted to be one of the first – a style setter not a style follower. I idolised Paul and his progressive style in so many ways, not just haircuts.

“It can be easy to think of social media influencers as a new phenomenon – people whose sole reason for fame is because they have lots of followers and can command ‘freebies’, because if they endorse it, sales go through the roof. But I think life has always been like it. Remember the ‘Delia effect’ – where supermarkets had a run on ingredients featured in Delia Smith’s cookery shows?

“It seems we have an in-built desire to follow – to aspire to be like those we see on pedestals, and therefore to want to dress, cook and act like them in order to be like them. This can often be harmless (albeit costly) but, equally, we know that poor role models can lead to devastating consequences.

“Recently, Youthscape published research into the role of young people as influencers when it comes to sharing their faith. The research found that peer-to-peer influence was considerable in teenagers – something that probably doesn’t come as a surprise to many of us. Interestingly, a large proportion of Christian youth said that the role of Christian peers was a major part of their choice to follow Jesus, and for those without a church upbringing this role was even more significant.

“Yet the research also showed that within our churches, nearly half did not engage with young people from non-Christian homes, and 4 in 10 said their ministry was mainly about discipling those already within the church, rather than reaching out to those outside the church.

“As Christians, we are called to follow Jesus – it’s what the word ‘disciple’ is all about. It is understandable that churches often focus on this element of youth ministry. Yet Jesus was, quite literally, a man on a mission. Following Jesus must surely be as much about influencing those we come into contact with, because that’s what He did.

“When we focus our youth ministry on growing the young people within the church, that needs to be done with the understanding that they can, and will, be an influence on their peers. Most of their life is spent with people who aren’t from a church background, and the Youthscape research shows that where the confidence and knowledge is given to them, young people are exactly the right people to engage their peers with God.

“When we ask children and young people to ‘be like Jesus’, we are asking too much of them to do it alone. With a world full of influencers, we need to ensure that we are the role models they are looking for – we need to ‘be like Jesus’ ourselves to guide them in a similar direction. Jesus calls us to be disciples that make disciples, so we need to be influenced by Him, and influence those around us.”