The partnership between Gloucester and Dornakal Dioceses was established in 2001, under Bishop Rajarathnam. Since then the link has seen two changes of bishop in Dornakal – Bishop Devamani in 2006 and Bishop Prasada Rao in 2012.

A letter from Dornakal re: Covid-19 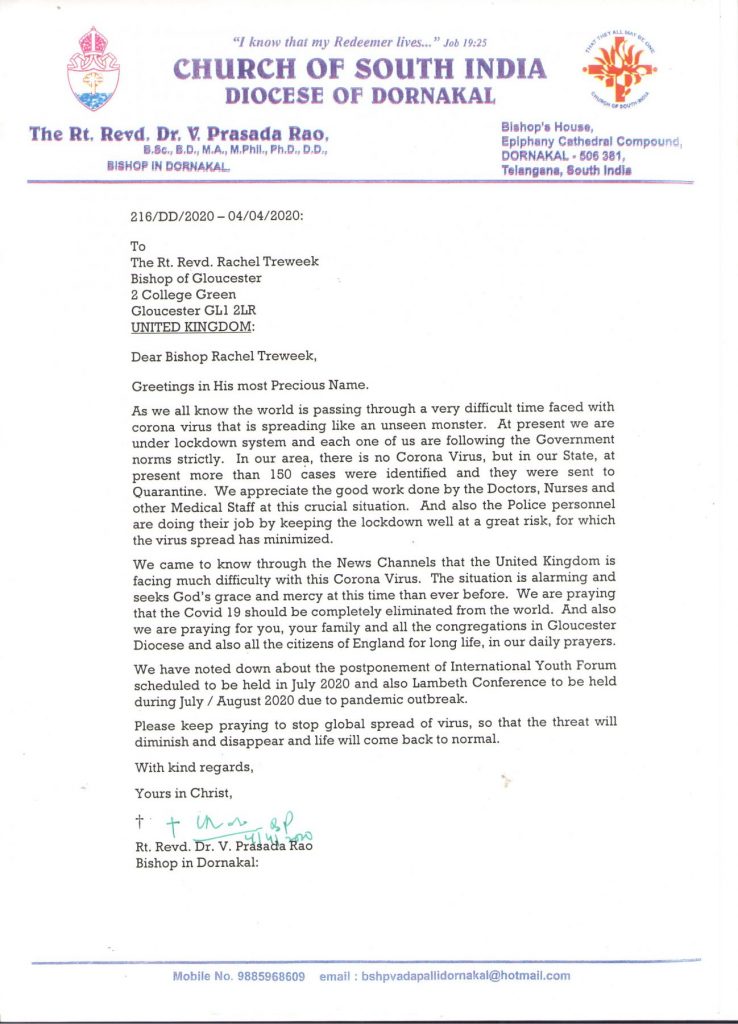 Most of the Diocese is in the recently formed state of Telangana (formerly part of Andhra Pradesh), along with some smaller areas in Andhra Pradesh and Orissa, and is predominantly rural. There are approximately 900 congregations, many in small villages, including tribal settlements. The main language in this part of India is Telugu, with very little English spoken. The main towns in the Diocese are Khammam and Kothagudem, and the largest congregations are based here. Most of the congregations though are in villages or smaller towns. Much of the employment in the area is agricultural, especially in growing chilies, rice and cotton, with many also working in coal mining.

The Diocese is active in healthcare and education. The main church sponsored hospital, St Mary’s in Khammam, was originally set up by CMS but now works on a more limited scale in comparison to the increasingly widespread government hospitals.  The church schools in the Diocese include a number of boarding schools for children from remote villages and there are a number of hostels which provide accommodation. Many of these are sponsored and financed by Christian charities such as Compassion or the German organisation, KNH. There are a number of these boarding hostels in the Cathedral Compound in Dornakal, including two for deaf children, linked to the School for the Deaf. There is also an English Medium School in Dornakal which has an active link with the Kings School in Gloucester. There are plans to increase the number of English medium schools across the Diocese and the collections at Episcopal services in the Gloucester Diocese this year have been towards the first of these in the small town of Sathupalli.

In the villages there are a few church-run day care centres for pre-school children. These provide childcare facilities for the children of working parents in some of the poorest communities. Two of these, at Garidepalli and Kodad, were established with funding from the Gloucester Diocese. Parishes here have also helped to fund a number of church buildings in villages.

The partnership has been built up mainly through a number of visits both ways, including the annual youth trip.

The Link Officer for the Dornakal Partnership is Revd Canon David Bowers  and he is always happy to provide further information. He can be contacted on 01285 860221, or by email at . You can visit the website at http://www.csidornakaldiocese.org

History of the Diocese and Cathedral

The Dornakal Diocese was formed in 1912 under the leadership of Bishop V.S Azariah, the first indigenous Indian bishop and it built on the work of CMS and the Indian Missionary Society. The Cathedral of the Epiphany in Dornakal was consecrated on 6th January 1939, after 25 years of construction, and was designed by Bishop Azariah to be a truly Indian cathedral, with elements of traditional Hindu and Islamic architectural design alongside the predominant Christian symbolism.