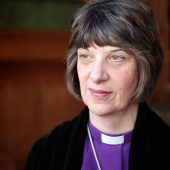 Bishop Rachel and Bishop Robert have signed a letter to the Times, expressing concern about the effect of the two child limit policy for tax credit and universal credit. It is one year since the policy has been brought in, and the Church of England, End Child Poverty and the Child Poverty Action Group have produced a report on the consequences; some already seen and some predicted.

60 Bishops along with representatives from other religions and denominations signed the letter which you can read in full below.

Today the “two-child limit” policy, which restricts tax credit and universal credit to the first two children in a family, has been in place for a year.  The policy is making it harder for parents to achieve a stable and resilient family life. By 2021, 640,000 families will have been affected. Most are low-earning working families, most have three children and some will have made decisions about family size when they were able to support children through earnings alone, but later claimed tax credits or universal credit after a bereavement, redundancy, separation, disability, illness or simply low pay.

The policy is expected to tip an estimated extra 200,000 children into poverty. It also conveys the regrettable message that some children matter less than others, depending on their place in the sibling birth order.

It is a grave concern that there are likely to be mothers who will face an invidious choice between poverty and terminating an unplanned pregnancy.

Children are a private joy and a public good. They are all equally deserving of subsistence support.

End Child Poverty, the Church of England and the Child Poverty Action Group have released a report today, monitoring the impact that the policy has had so far.

On April 6th 2017, the two-child limit came into effect, restricting financial support through tax credits or universal credit to families with more than two children – regardless of need. As this policy reaches one year old, around 160,000 families are now up to £2,780 a year worse off than they would have been if their youngest child had been born in the previous year. Half a million children live in these families, and some may find that their families cannot afford to throw them a birthday party this year. Over the next few years, more and more families and children will be affected by the two-child limit – around 2 million children by 2020/21, and 3 million children by 2025…

From February next year, the two-child limit will also apply to families with three or more children who fall on hard times and make a new claim for universal credit, irrespective of when their children were born. They will have substantially less to live on than universal credit first promised, as a result of both the two-child limit and other cuts such as work allowance reductions and the four-year benefits freeze. Many families will find that they do not have enough money in their pockets to meet their basic needs, even though they may
not fully understand why this is happening.

Eventually, this reform will mean about 600,000 three-child families receiving around £2,500 a year less on average than they would otherwise have got, with a further 300,000 families with four or more children getting £7,000 a year less on average. Including the impact of other changes since 2010, families with three or more children will be more than £5,000 a year worse off, on average, by 2021/22 than in the absence of welfare reforms. The UK is unique in having a two-child limit that restricts support to the first two children.
The majority of developed countries offer extra support to subsequent children, not less.