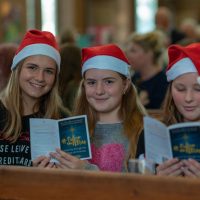 The Church of England today launched its own Christmas advert, with the message that churchgoers experience a feel-good factor which lasts all year.

The 90 second advert uses no actors and instead features genuine churchgoers of different ages going about Christmas preparations at their local church. The advertisement will feature extensively across multiple social media channels during the Christmas season.

The advertisement tells the story of churches reaching out to lonely and marginalised members of society – culminating in the simple message to people of all backgrounds to ‘join us at church this Christmas’.

The film also features a new version of the favourite carol O Little Town of Bethlehem, by composer Will Todd, whose work was featured at the inauguration service of President Obama, released by the Church of England as part of its #FollowTheStar Christmas campaign for 2018.

The single, recorded by St Martin’s Voices, will receive its radio premiere next Sunday (23 Dec) on Classic FM by presenter Aled Jones. It is available on iTunes and Spotify.

The #FollowTheStar campaign encourages people to reconnect with church at Christmas.

At the launch of the campaign at Lambeth Palace, The Archbishop of Canterbury, Justin Welby said: “#FollowTheStar doesn’t ask you to be perfect. It says: come just as you are to take the life-changing Christmas journey.

“Wherever you are this Christmas, you are invited to follow the star and to be with Jesus. You are welcome.

“You are deeply known and truly loved.”

The campaign has also received the backing of Great British Bake off baker Martha Collison, who collaborated with school children to bake a special star-themed Christmas recipe.

Adrian Harris, Head of Digital for the Church of England said: “The advert we’ve produced is about celebrating the ultimate gift, the birth of Jesus Christ.

“Our Follow the Star campaign will see thousands of churches up and down the country displaying stars as a sign of welcome and millions of people will follow the star to gather in churches this Christmas.”

In addition significant upgrades to the church-finder website AChurchNearYou.com now allow churchgoers to geolocate services close to them in real time, finding out which will feature carols and choirs.

The Follow the Star campaign will culminate in a large-scale ‘Night of the Stars’ on Friday 21 December, which will see Canterbury and Durham Cathedrals adorned with enormous stars, in the presence of Archbishop Justin Welby, and the Bishop of Durham respectively. Meanwhile churches up and down the country will light up their own stars, big and small, to welcome locals into church.

His anthem, The Call of Wisdom, was performed at the Queen’s Diamond Jubilee celebrations with a TV audience of 45 million people, and His arrangement of Amazing Grace was performed at President Barack Obama’s Inauguration Day service in 2013.

Commenting on the collaboration, Will Todd said: “It was such a pleasure to collaborate with the Church of England on this project and to make an arrangement of a well-known carol that works in this way. For me it was about creating something both familiar and fresh. It was amazing to partner with St Martin’s Voices to bring it to life.”

The film features members of the congregation, clergy and community at All Saints Church in Ware in Hertfordshire.

Clara Jones, who features in the advert with her sons Sebastian, 2 and Kasper, 1, attends the toddler and baby group run by Christ Church, Ware, which is shown in the advert.

“I like being part of a community and talking to other mums in the same situation as me,” she said.

“I’m more inclined to go to a church service because of the warm welcome I’ve received at these groups, and I can easily find information on the services held at the church.

“We are taking the boys to church this Christmas, and feel it is important to teach them that it’s not all about presents at Christmas and chocolate at Easter, but about Jesus, and his love for us.”