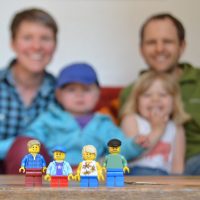 Lockdown with two preschool children is relentless. Trying to get them engaged with online church is nigh on impossible. LEGO® to the rescue!

Even before we had children, LEGO® featured in our marriage.  For our wedding, we made custom LEGO® Minifigures of ourselves.  For our honeymoon motorhome trip around Europe, we created a very basic stop-motion animation of these figures and a LEGO® motor home featuring our niece.  But when we had kids, initially the LEGO® had to go away, then we had to learn to share it, then to accept our creations being swiftly destroyed.

Whilst our toddler was napping one morning, we entertained our four year old for a good half hour making a new stop-motion of a LEGO® motorhome – taking turns to press the remote control for the camera or move the motor home.  This was fairly fresh in our minds when we were discussing with our church family how we might engage some of the younger members in the following week’s meeting. So we volunteered to make a little video of the bible story; Jesus on the road to Emmaus.

The first job was to simplify the story, and work out the different sets that we’d need to build.  Kiri did this part, drawing upon experience gained through her graphic design degree that focused on interaction and moving image.  We then jointly built the sets and got cracking with the shooting of the footage.

As with the motorhome stop-motion, it was a case of positioning a shot, clicking the remote, moving the characters, clicking the remote and repeating.  We involved our four year old in the initial shooting of the footage, but to be honest, it’s slow progress to shoot a frame, move a LEGO® leg, shoot another frame etc.  Narration would be more interesting, so armed with the script, we recorded my voice saying each line, parroted back by the little one.  Then in the editing of the audio (with Audacity; free audio editing software) we cut out my voice to leave a seamless (well, nearly) child’s narration. Most of the intonation and expression wasn’t copied from me – a true four year old’s interpretation.

Neither of us have really done much stop-motion animation before, so we did a lot of learning as we went on; for example how much to move the characters each frame, or weighing the set down so that as we move the characters, the board doesn’t move as well.  Once we had taken all of the photos (around 600 per video), we uploaded them into DaVinci Resolve (free video editing software) to edit it together and add the narration.

Each video has taken about six hours to make, which we’ve crammed into evenings when the kids are asleep or the breaks from childcare that we give each other. It’s a fun, creative outlet for both of us in these weird times and it’s great to be able to share Bible stories in a format that’s been well received by all.