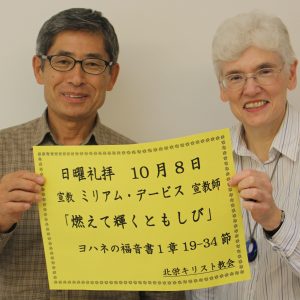 As six people prepare to be ordained deacon in a special service at Gloucester Cathedral on Sunday 27 June at 10.15am, we are catching up with some of the candidates to hear about their calling and their lives to this point.

Miriam Davis spent 42 years in Japan and talks about the culture shock of returning to the UK three and a half years ago.

“The first year and a half that I was back in the UK, I found very difficult. It took a long time to settle and feel at home in this culture again, to cope with setting up home and the masses of choices – broadband, utilities, car… In the beginning people said to me “Welcome home”. I wanted to cry out that it’s not home. Then I felt God saying to me “You know it’s right to come back to the UK – this is your home now and the timing is right.” Instead of saying I’d come back to the UK, I started saying that I had come home for good. When I did that, it changed my attitude – now it really is home.”

During Miriam’s time in Japan, she had lots of different roles. She’s been a teacher of English in secondary school and university, a missionary and full-time church planter, starting from almost zero and reaching out to people. She’s also spent 20 years helping to run a language school which taught Japanese to missionaries.

She said, “A very small percentage of the population are Christians in Japan – about 1% are Christian, but only about 0.5% are practicing Christians. Christianity is looked on favourably in Japan due to its history in setting up social enterprises like schools, hospitals and orphanages. The Japanese Church is really welcoming of cross-cultural work.

She talks about the challenges that individual Japanese people might experience when they consider converting to Christianity.

“As non-Japanese, I found that I could break through some of the barriers that Japanese Christians have in witnessing to non-Christian friends. Group harmony is one of the key virtues in Japan – dating back to the Confucian influence which came over from China in around the 6th century AD. The idea is not to do anything that makes you noticeable or distinct from a group. For Japanese to become Christians, it is taking up the cross – coming into an individual vertical relationship with God cuts right across the all-important horizontal relationships with family, school or company.

“Relatives of individuals wanting to become Christians often oppose their getting baptised because they fear they will no longer care for their their ancestors if they convert.It was important to people to see that the church cares about family. When someone dies in Japan, people usually offer prayers or memorial services each month, then twice a year or every year. We explained that in Christianity it was ok to go to the grave and tend it, and to offer prayers for the dead, but not to offer incense to the dead or pray to them directly.”

Miriam had a feeling of call to ordained ministry for a long time. In the mid 90s she was in the UK for a couple of years, suffering burnout and depression and unsure if she would be able to return to Japan. She started thinking about the idea of ordination, but then was able to go back to Japan and felt that was her calling for that time.

She said, “I thought that given my age and the need for further study it just wasn’t an option. When I met my new vicar three years ago, he asked me why I didn’t go for ordained ministry as this was basically what I had been doing in Japan. I left that thought gently on the back burner, but at a Maundy Thursday renewal of vows service, we were given cards about vocation and asked to think about people in the church we might encourage and approach. I was praying about who might be called to ordaination in our church and realised that it was time for me to respond.

“At my stage of life, as a retired person, having just settled back into the UK, becoming an Ordained Local Minister is wonderful. I have been an overseas member of my church, St Philip and St James, in Hucclecote, for a long time – 26 years! Just to be able to serve in that church which has supported me financially and prayed for me, to be able to give back is a tremendous privilege. I’m looking forward to the sacramental side of ministry and to getting involved with weddings and baptisms and the outreach that goes with that ministry.

When I set off for Japan, I initially only went for two years. I had no idea it would end up being a lifetime. Every step of the way, God has opened a door and surprised me. If you’re feeling a call to ministry, don’t think about all the things that could happen – God will guide you.

John 10:4 says, “When he has brought out all his own, he goes on ahead of them, and his sheep follow him because they know his voice.” This has been a life verse for me. Jesus leads his sheep out and when he leads them, he goes ahead. I would always encourage people to follow the shepherd one step at a time.”

Miriam will be ordained deacon with five other people at 10.15am on Sunday 27 June at Gloucester Cathedral.