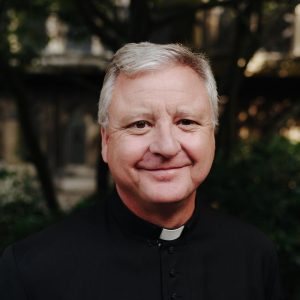 We are proud to share that No.10 Downing Street has announced that Her Majesty the Queen has approved the nomination of the Very Reverend Stephen Lake, Dean of Gloucester, for election as the next Bishop of Salisbury.

Stephen has been Dean of Gloucester for almost eleven years and will begin his new ministry in April, with his last Sunday preaching at Gloucester Cathedral on Sunday 3 April. In responding to his appointment Dean Stephen, said:

“Somewhat to my surprise, but with confidence in God, I am being called to be the next Bishop of Salisbury. The past eleven years in Gloucester have been an unqualified joy with the Cathedral, the city and the diocese all growing in confidence and reach. We shall leave Gloucester in April, and it will always be a special place in our hearts.

A cathedral is more than just a building and is only ever as strong as its community. I have been extremely fortunate to lead an effective team of staff and volunteers while working alongside some truly extraordinary partners over the last decade. I am immensely proud of the journey we have shared – it has been a privilege to be part of it. Please continue to support Your Cathedral.”

“The announcement of Dean Stephen’s appointment as the next Bishop of Salisbury is wonderful news, both for the Diocese of Salisbury and for the wider Church, yet he will be sorely missed in the Diocese of Gloucester. Under Stephen’s leadership, the Cathedral has seen significant transformation, not only regarding the Cathedral building and its surrounds through the delivery of the Project Pilgrim initiative, but also in the growth of the Cathedral as a place of welcome to all. For more than a decade, not least during a time of pandemic, Stephen has ensured that the Cathedral has continued to develop as a Beacon of Hope, pointing to the love of God. He leaves the Cathedral in a good place with an able team of staff and volunteers.

“Stephen has been a much-valued friend and colleague, and his vision, energy, wisdom and imagination will be missed by the senior staff team and the wider diocese. Furthermore, each member of the Lake family has played a significant part in the life and well-being of the diocese and beyond, and they will all be greatly missed. As a diocese we will be holding Stephen and his family in our prayers.”

The Bishop of Tewkesbury, the Right Reverend Robert Springett said:

“It has been both a delight and a privilege to share in Ministry with Stephen over these last 10 years that he has been Dean here. I personally am grateful for his friendship and know the deep gifts that he will bring to this new ministry as Bishop of Salisbury.”

Stephen trained for ministry at Chichester Theological College and is returning to his roots with this appointment. He grew up in Poole, held his curacy at Sherborne Abbey with Castleton and Lillington and was ordained Priest in 1989.

He became Vicar of St Aldhelm’s, Branksome, Poole from 1992 and was additionally appointed Rural Dean of Poole in 2000. In 2001, Stephen was appointed Sub Dean of St Albans, and took up his current role as Dean of Gloucester in 2011.

Stephen is a Church Commissioner and Lead Dean for Safeguarding. He is married to Carol, and they have three adult children.

The Diocese of Salisbury contains 434 parishes with 573 churches in 138 groups (known as benefices). 90% of the parishes are rural, and many of these are in benefices of up to 15 churches.

In 2020 it was agreed that the process should begin for the Bailiwicks of Jersey and Guernsey to be linked to the Diocese of Salisbury. Therefore, Dean Stephen will in due course, once the process is complete, also be Bishop for the Channel Islands.