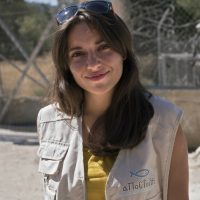 Tales from life on the frontline of the response to the refugee crisis on the Greek island of Samos will be shared with Gloucester Cathedral this weekend when aid worker Foteini Koutsotheodorou visits the county.

Foteini,31, works for Christian Aid partner Apostoli, a charitable wing of the Greek Orthodox Church, and spent ten months on Samos delivering immediate humanitarian aid including food, hygiene kits and sleeping bags to those arriving from Turkey, just 1.1km away across the Aegean Sea.

She is spending the week sharing her experiences of the human cost of the refugee crisis, encouraging supporters in 12 events across the South West ahead of Christian Aid Week (May 14-20) which this year will look at the charity’s work with refugees in Greece and around the world.

Last year local Christian Aid groups and churches across Gloucestershire raised over £132,000 during Christian Aid Week through events and door to door collections.

Foteini, who has a Masters degree in Sociology and focused on Migration and Ethnic Studies, originally worked as a volunteer on the island of Lesbos but was then recruited as a field officer with Apostoli to Samos as thousands of people escaped conflict in the Middle East and Afghanistan in boats.

She said: “People were arriving daily in their hundreds in need of basic goods. Every day was a surprise, presenting new challenges. Working with other organisations we had to assess needs quickly and organise the distribution and provision of food, blankets and tents.

“Talking and communicating each day with those arriving was extraordinary. The discussions not only helped us gather all the data we needed to best help them but it also meant they had a voice.”

Foteini described the difficulty in dealing with not only the large numbers of people but also in witnessing their transition from relief and hope to despair and uncertainty as borders closed and their future remained unclear.

She said: “It was such a privilege to share with the refugees those very crucial moments when they realized that they had survived, that they were supported at some level, if not necessarily with the offer of a shelter, but with medical help, food and a blanket.

“I have no words to describe it but there is pain and gratitude on adults’ faces, happiness on children’s faces, a birth of optimism.

“At the same time for us, there is a sense of the overwhelming need and this was on my mind often when I felt that I was not actually offering enough, the sleeping bag will last for quite long but it will not replace the comfort and warmth of a house.

“But I slowly moved to an understanding that every small donation or act of kindness makes a difference. There were so many nights of cold and rain when my storage was empty and we were begging for a sleeping bag to appear.

“What is so important, maybe even more urgent than before, is that we support these people. Borders are closed and they worry what their future holds.

“People are here to stay and we have still the privilege to address them in the new context for everyone’s benefit. It is a call for all of us, Europe and Christianity for common mobilization, to embrace each and every one whatever their gender, ethnicity, colour or religion.”

Foteini, who is now helping to deliver Apostoli projects on mainland Greece, including providing informal education to refugee children, will speak at:

and Gloucester Cathedral at 10.15am am on Sunday 5 February

Christian Aid’s Gloucestershire Coordinator Noel Sharp said: “Christian Aid Week was set up 60 years ago to support our work with refugees in Europe following the Second World War and it is poignant that this is our focus again in 2017.

“We are so grateful to our supporters who enable us to not only provide critical humanitarian aid such as that on Samos but also to work with partner organisations to tackle the root causes of poverty, conflict and displacement around the world.

“Please do come along and hear Foteini speak and help us to build a world where everyone has a safe place to call home.”